The following post is sponsored by The Color Run. I didn't receive any compensation for my thoughts, but they did provide me with two free race registrations. As always, these opinions are my own and in no way influenced by the company.

Running in a race is a lot of fun. Hard work, but fun. And then there's The Color Run. With all forms of competition removed, it takes the fun factor up a notch. This past weekend, The Color Run came back to South Bend. I ran it with my sister and my mother. 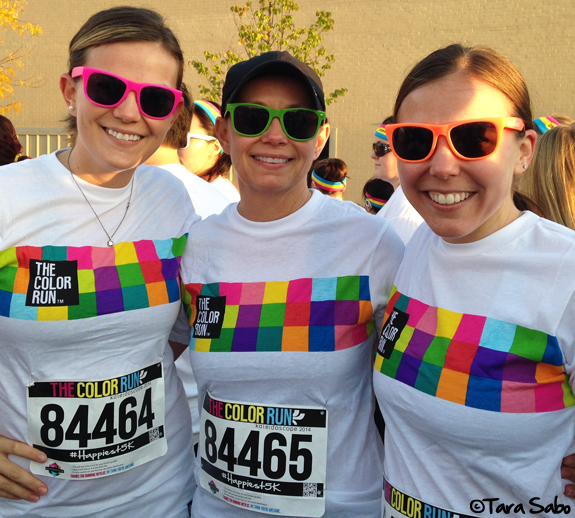 We ran it last year, too. 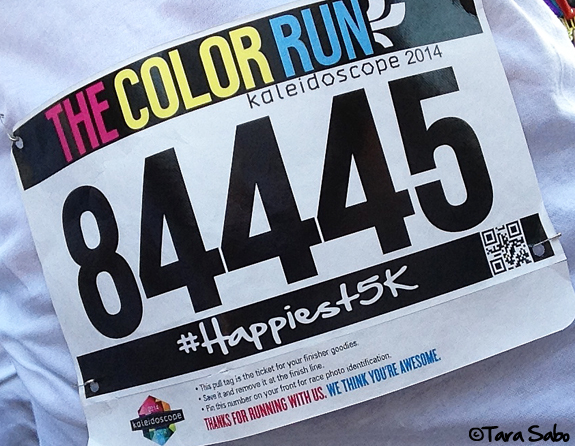 Here's the thing about The Color Run: If you're looking for a race, you'll get annoyed by all the walkers. It's the truth. The Color Run is not an event you attend to make 5K records. Remember, the competition is removed. That said, it IS a run, so you can go about it as you see fit. 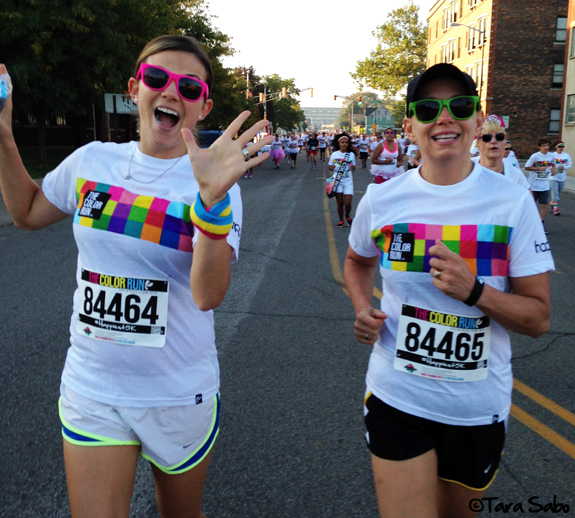 But the sheer number of walkers involved makes it really hard to maintain any form of consistency while running. We had to do a lot of weaving. Part of me thinks that this should be taken into consideration by the event planners—maybe those who want to run it should start first—and part of me is trying to remember that it's not a race. Because seriously, what race do you know of that willingly douses its participants in a mixture of cornstarch and color? 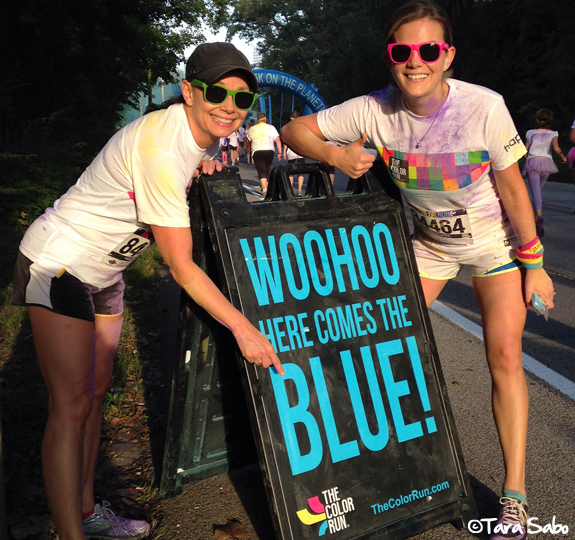 We got through Blue pretty easily. There was a bit of a backup in the second color zone, which proved to be a bit annoying. Still, we were pretty colorful by the end of the race. 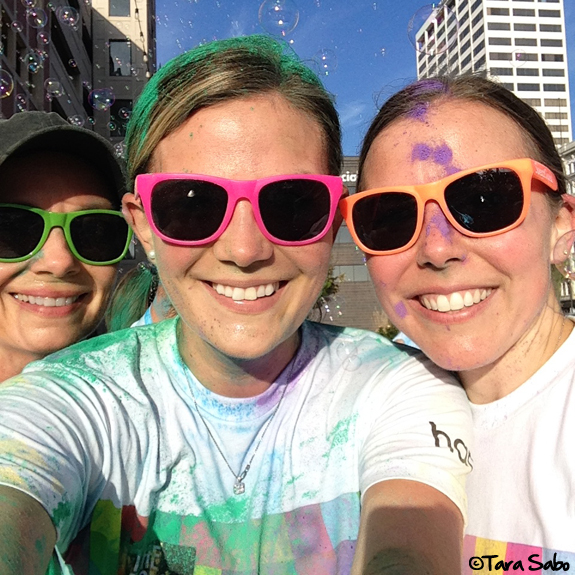 If you've got The Color Run on your schedule, invest in some cheap sunnies. We didn't run with them last year, but the eye coverage was nice. For the most part. I still somehow managed to get a face full of purple.

This year, The Color Run is on a Kaleidoscope Tour. There were some pretty fun photo opps at the post-race party, like this walk in tunnel of mirrors that proved perfect for selfies: 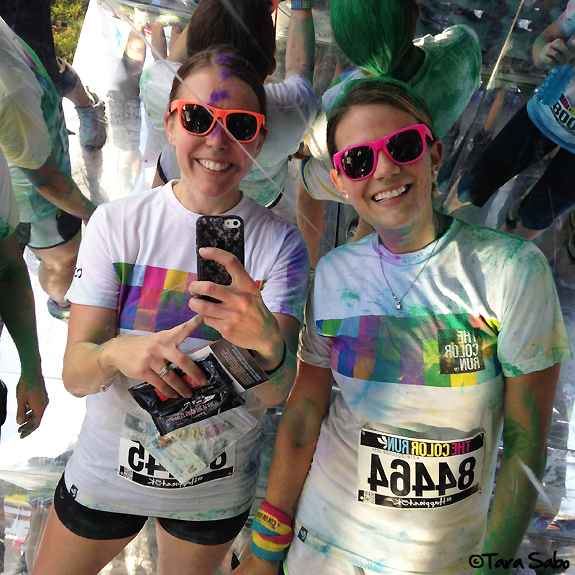 Seriously, the green guy dumped an entire bottle on my sister's head. 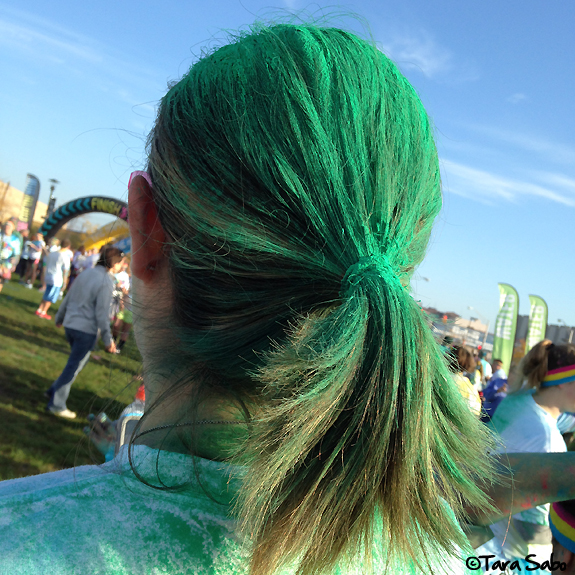 She definitely won the prize for collecting the most color. In our group, at least.

When all is said and done, I think my favorite part of The Color Run is the post-race color throw. It's just so cool to see all that color flying up in the air. 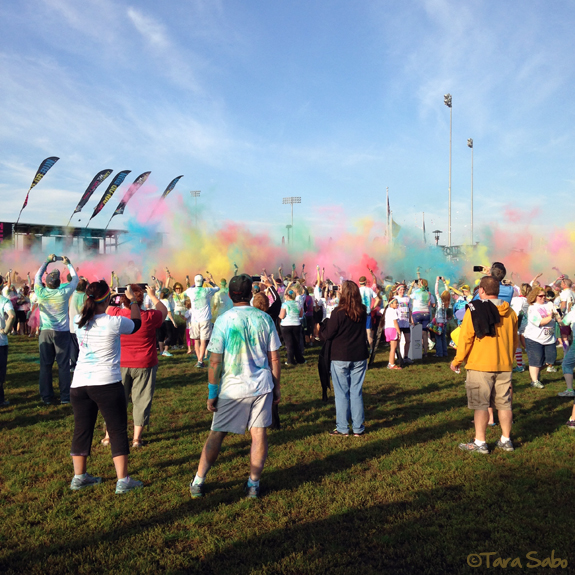 If you are considering The Color Run, I say do it. But be prepared to have fun. Set all running goals aside and just go with the flow. Because if you go into it with a true 5K mentality, you'll get frustrated. Or, make sure you're at the front or back of the pack to avoid the bulk of the participants.

My thoughts on The Color Run in South Bend, specifically (in case any of the event planners are reading this): Why did we have to stop at all the stoplights? Were only some of the streets blocked off? Also, that path along the river...super not at all runner friendly. It was more like a bottleneck of people moving along. 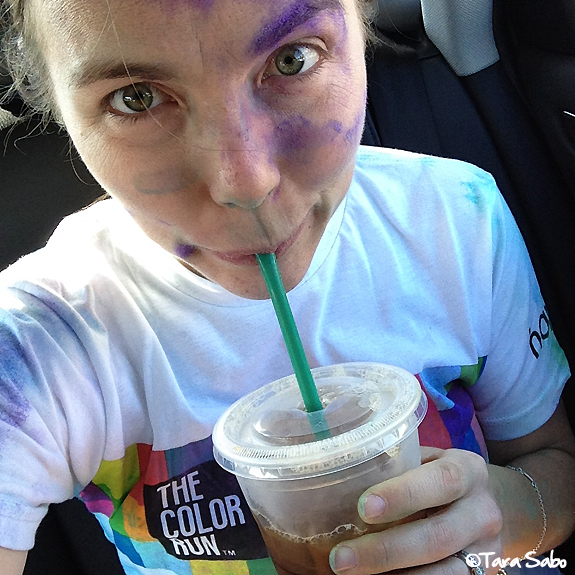 Mom and I ran five miles before The Color Run because that's what our training plans for The Grand Rapids Marathon Relay called for. This had me up with the stars to get down to South Bend in time.

Coffee was a must.
A definite must.

Question: Ever do The Color Run? What are your thoughts? If you're a runner, how do you approach events like this? Make it fun, or make it a decent run?

I think just getting up each day and taking care of the house and kids is pretty active. Between the chores, errands and car pooling {yep this mom is a sport mom} that keeps me going all the time. But my running is me time and my most active part of the day.

love this!
i made it my mission to walk anywhere that would take 30 minutes or less. it really keeps me active, and i seem to never take my car out on the weekend. it's awesome.
http://scribblesandsass.com