Why I Decided to Run a Marathon #neversaynever

In my almost ten years of running, I've finished at least ten official half marathons. Remember, I was the girl who swore them off. Now, the distance is very much my favorite. 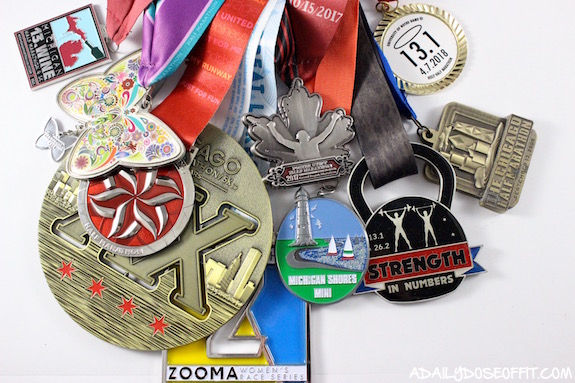 At one point this Summer, a friend of mine asked me (as most of my friends do whenever I finish a half marathon) when I was going to run a full marathon. I've had no desire to ever run one. I've also had every excuse in the book:

"I teach group fitness and don't have the energy for more miles."
"I have two kids, so maybe when they're older."
"I really don't feel the need to."
"It doesn't interest me."
"Never."

Truth be told, the marathon scares me. You've heard the stories, right? Of death and collapsing and pain and misfortune? Yeah, no thanks. And even though I'm loving the half marathon, they've always been a challenge for me. Except all of that changed this year. Something clicked. I started doing actual workouts to improve speed and consistency. I dialed in my nutrition before, during and after races and training runs. And I finished a half marathon this year that left me wanting more.

So I feel pretty good about my running abilities. And because of that, I generally just believe in myself a little more. I also know that I'm heading toward having both kids in school all day, which eliminates the "maybe when they're older" excuse.

Honestly, though...all of my excuses are silly. And for the first time ever, I can see myself running a full marathon. It excites me. It still scares me, but I'm okay with that. I am ultimately fearless, right? 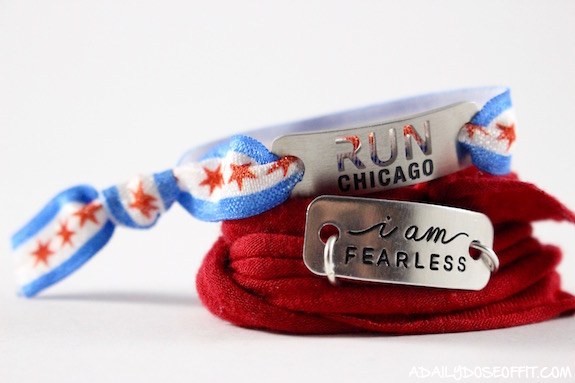 I went to Chicago the weekend of this year's marathon to purposely surround myself with marathon fever. And boy, did I catch the bug. The city, one of my favorite cities ever, came alive with runners. The Chicago International 5K was an amazing race. It was full of running celebrities, marathoners and non-marathoners like myself. Everyone was excited, whether or not they were running the actual marathon.

And on the day of this year's Chicago Marathon, I anxiously followed friends that were running it. I stared in awe at the elites striding effortlessly across my TV screen. But there was one very distinct moment from the entire weekend that sealed the deal for me: 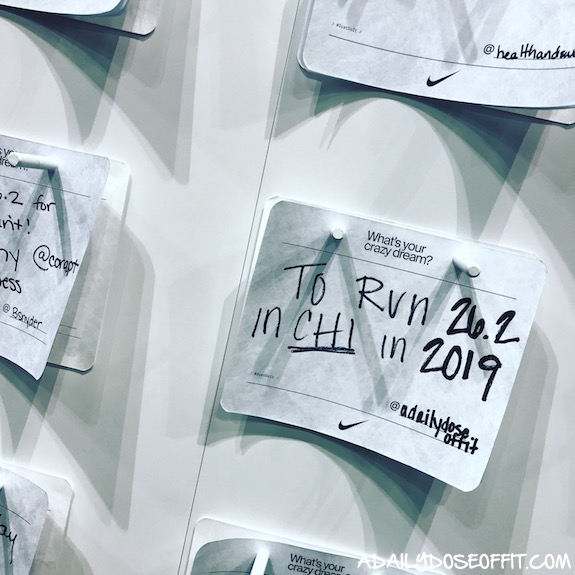 I stood at a podium writing that bib out at the Abbot Health and Fitness Expo when a man walked up to me: "I did that same thing last year, and I made it back. I'm running my first marathon on Sunday. Go put that on the wall. I'll see you again next year."

And he will. I'll be there. I'm doing this. #neversaynever
TARA No comments:

Something new and exciting.

I ran my very first half marathon in 2009. It was in September, a few weeks before my wedding. I trained all Summer while actively planning the biggest day of my life. At the time, I was also transitioning from a career in advertising to a career in the fitness industry. I loved running, but it hadn't yet become my thing. 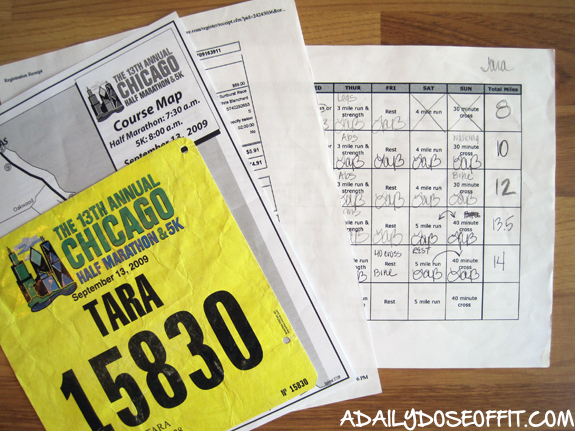 I swore to myself that I would never run another half marathon again. It was too much. I was sick of running long distances, and I remember feeling as though I was in a permanent state of exhaustion.

Looking back, I realize now that, although I got through it, I didn't exactly approach my first half marathon with enough knowledge or understanding of what it takes to run longer distances. I just thought you had to build up the miles and be done with it. Again, running had not yet become my thing.

I've also gone back to Chicago quite a bit, too: 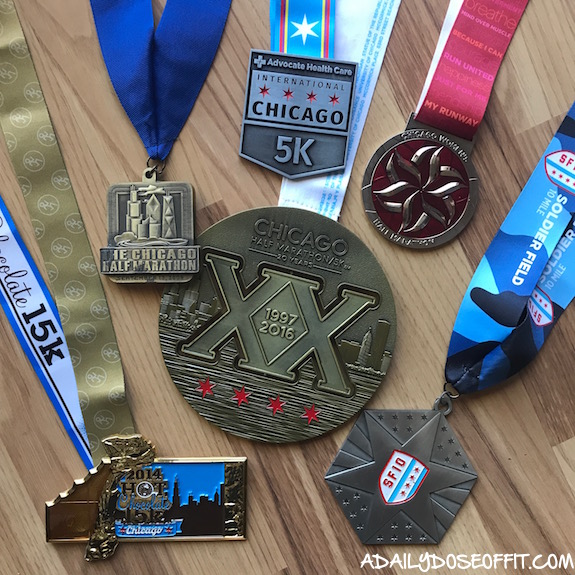 And I'm very much looking forward to sharing my journey.

Hey you.
Miss me? 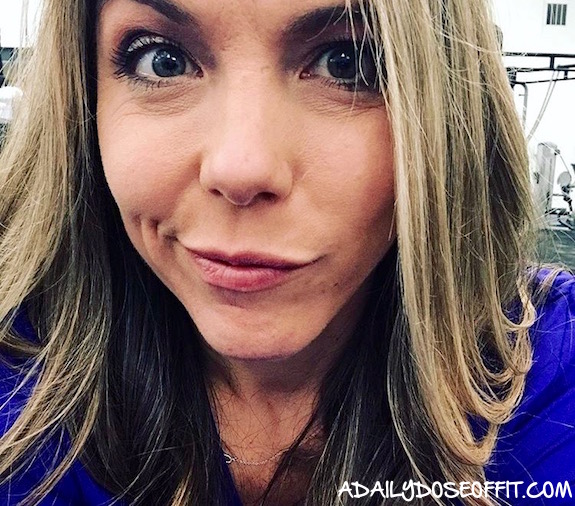 I've let my poor little corner of the Internet get full of cobwebs and silence. A Daily Dose of Fit has been all but gone, but I never forgot it. When I first started the blog, I wanted to be a blogger. I wanted to make money, work with brands and do fancy things while I shared my interest in fitness. But the more ingrained I got into the world of blogging, the more fake it felt to me. I lost sight of who I was and why I was writing because I got too busy competing with my peers:

"Why aren't my page views up?"
"Why doesn't that brand want to work with me?"
"Why can't I make more money?"

Truth be told, the answers to those questions required actions that turned my creative outlet into a job. I wanted to be a successful blogger in every sense of the word, but I also wanted to share my perspective. To share me, my experiences and my interest in fitness so that I could truly and genuinely inspire others from the bottom of my heart. But I couldn't balance being a blogger with being true to me and my message.

I just needed a break.

And the easiest thing to let go of was A Daily Dose of Fit.
But I did something today. Something big and exciting that scares me just a bit. 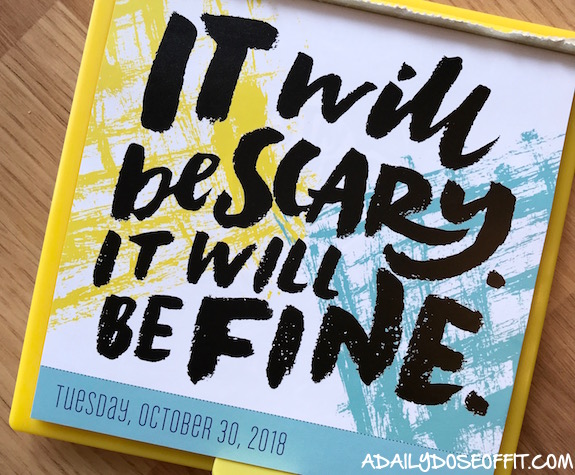 I still have the gym job. I still have the running store job. Life with two kids is crazier than ever. But this thing I'm working on, it's going to be an adventure I won't forget. And I'm going to need somewhere to talk about it. I don't care about page views. If a brand wants to work with me, great. I'll consider it if their message fits mine. But I won't be actively seeking out partnerships like I used to.

Because I don't want to be a blogger anymore.
I just want to blog. That's what I do. I write.