Last night, I had THE worst case of race anxiety ever. Like, ever. On top of being really nervous about my two-week taper, the weather was predicted to be extremely hot and warm with humidity levels at 90%. Not ideal at all. And not what I had been training in. It's been an unusually cool summer which has produced some awesome running conditions. I was able to get myself into a pace that would put me on track for a sub 2-hour finish, which would ultimately be a PR for me. I was excited about that, really excited, but with this new development in the weather...I just wasn't sure. I was literally freaking out about running. I did not want to be THAT runner that ends up on the side of the course with heat exhaustion.

On top of that, it was going to be a special run because I was running alongside some of my best girlfriends. We were "Team Bride" because we are all here in Indy to celebrate our friend's wedding. 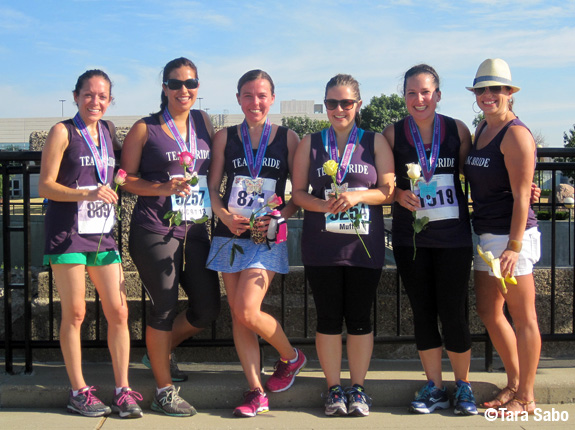 We had 5k runners, half marathoners and one cheerleader in our group. And we all survived. I survived. All that worrying and I did just fine. More than fine, actually. I finished in 2:05.00.846. Five minutes over my goal, but I'll take it because it's still a PR.

I set a new PR in a race I thought I'd fail.
Yes, I'll definitely take it.

5 MEMORABLE MOMENTS FROM THE #INDYWOMENSHALF

1) I realized a mile into it that I hadn't started MapMyRun. I don't have a Garmin or a Polar, so it's what I rely on to determine pace and distance. I think, ultimately, that this was a good thing. I had no idea how fast I was running. No idea at all, so I just ran according to my body and how it felt. And I feel like this is a smart way to run. Especially when there's a heat factor.

2) There was a group of angels handing out iced towels at the Mile 8 beverage station. I cannot even tell you how awesome this was. I ran the next mile or so with it around my neck after rubbing it on my arms, face and abdomen. Seriously, in combination with the Gatorade, I truly believe this got me through the last five miles because I think the last five miles were the hottest.

3) My friend Maria ran with me the whole way and we both noticed how unusually quiet the course was. There wasn't much for on-course entertainment, no bands or anything, but there was one lady with a cowbell that we ended up seeing twice. She was by herself on a street corner both times. And she was cheering her heart out for anyone and everyone that ran by her. Looking at her, you'd assume she was a runner to, so I think she just understood the importance of moral support. I wanted to hug her, to thank her for cheering for me even though she didn't know me.

4) I had quite the support system at the end. I saw Jason on the sidelines just before the final push to the finish line. I think it's only the second time he's ever come out for a race, and he was right where I needed him to be. He had our camera, which forced me to kick it up a notch...which ultimately got me to the finish line to end it strong. 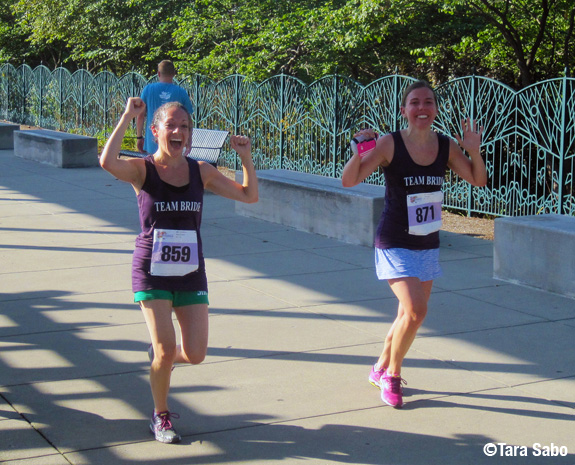 The rest of my friends were at the finish line, too and I could hear them cheering as I ran by. I really, honestly don't think anyone else's friends cheered as loudly as mine. #theyrock

5) I've never been so happy to cross a finish line. It was the first time I crossed a finish line with absolutely nothing left in me. In fact, I went right to the medical tent, sat down on their cots and asked for some towels. I seriously thought I was going to pass out, but really I just needed to sit. Never in my life have I ever ended up in a medical tent, and I'm glad it wasn't for anything more serious. I was just done. Literally, done.

Not only were the medals sweet, we got roses, too.
I think all races should end with a rose. 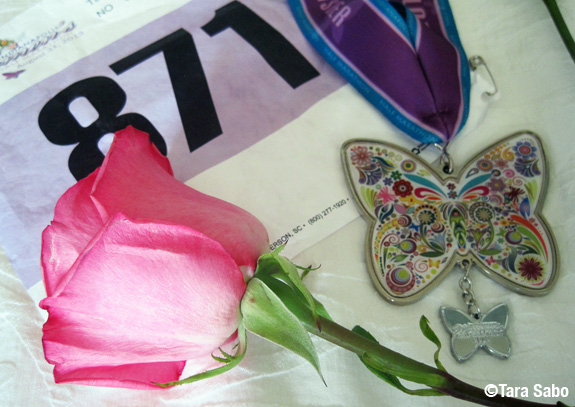 Thanks for running with me, Maria. I couldn't have done it without ya, partner: 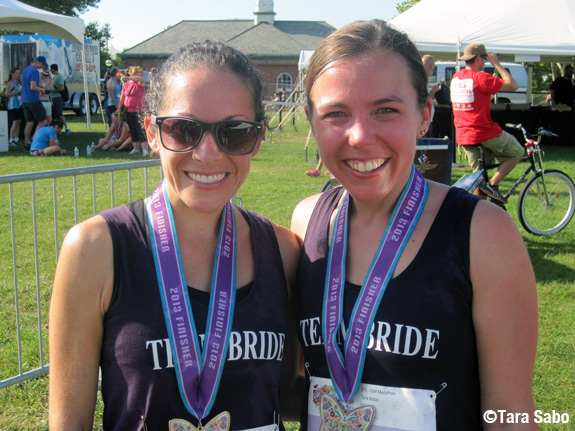 Question: Did you race today?
TARA

I know all about the race anxiety, but you did it girl. Awesome job.